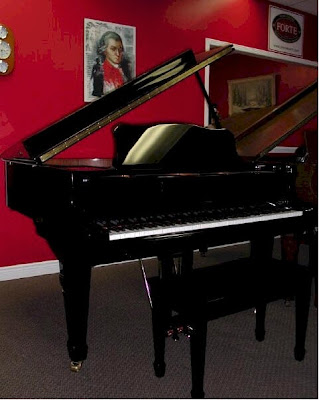 Waiting in the vestibule just outside the sliding doors that led to the room where the shiny black grand piano waited, I dreaded going in. I could hear the student whose lesson was just before mine playing his scales perfectly – and was a little envious. That was something I couldn’t do well. I loved music but hated scales!
My teacher, Mr. Schultz, said we must practice scales to develop hand co-ordination. I can still hear his words, “Absolute co-ordination is essential between both hands as they run up and down the keyboard. Scales also help develop finger strength and a strong sense of rhythm and speed, both of which are important for playing the piano,” he said.
I nodded in agreement, but secretly detested every minute I had to spend practicing scales. And that’s why I dreaded going in for my lesson today. I hadn’t practiced my scales, but had spent my time practicing my recital piece instead. It was an energetic piece of classical musical that, when I was having a good day, made me feel like a great concert pianist!
The silence was broken when the big wooden doors separated noisily in the middle. A young boy came out smiling and hurried toward the door that led to the outside. Mr. Schultz turned his attention to me. “Hello,Peggeee” he said. “Please come in.” He was from Germany and spoke with an accent that sometimes gave me pause.
“Hi,” I answered shyly, entering the doors so he could slide them closed again. I wondered if the next student would listen through the doors and laugh when I made a mess of my scales.
But there was time. Maybe my teacher would forget the scales and let me go right on to my recital piece, especially if our conversation lasted longer than usual. You see, Mr. Schultz didn’t use the whole half-hour for the lesson. He liked to socialize. Once we were behind those closed doors, I was invited to sit down on the maroon leather sofa that was behind the piano bench. That’s where he sat; looking over the shoulder of each student as he or she played his lesson for that week.
But for now, we sat together on the sofa and, just like clockwork, another set of sliding doors opened and his wife appeared with a glass of red kool-aid. Always red. She handed it to me, smiling sweetly, then turned and left the room the same way she had come in. This routine never changed in the four years I took lessons from Mr. Schultz every Saturday, rain or shine!
There’s no nice way to say it – the kool-aid was terrible! They must have tried to conserve on sugar because it was never sweet. Perhaps they didn’t realize it should be sweetened. I was never sure of the reason; just knew it was hard to swallow. Didn’t matter. I had to make an effort. My mother would have had my hide if I’d been rude! But it didn’t take long to learn that, if I sipped slowly, my time would start getting short and he’d say, “Vee’d better get started vith the lesson now.”
While I sipped, he talked. I learned of the many things he’d done and seen growing up in Germany and that he claimed to have met famous people such as the great Russian composer, Peter Tchaikovsky and Dutch painter, Vincent van Gogh, among others.
Listening to the stories this 81 year old man related, while I pretended to drink the insipid red liquid, was an education far above and beyond my piano lesson.
Despite all this diversion, I did learn to play the piano.
At one spring recital, I was the only graduate. Mr. Schultz presented me with a certificate, a large bouquet of red roses and a kiss on the cheek. There was a small reception where we mingled with the other students and their families. It was very nice.
We also had cookies and red Kool-Aid!
~~~
Posted by Peggy~ at 9:31 PM

What an interesting story of your piano teacher. Beautiful!

I have had that test a few times the first time I had to drive 24 miles home whilemy eyes was still dilated . I didn't break any speed limit coming home

Cute story! You're a good writer - you keep my attention all through it!! I always wanted to learn the piano, but its kinda hard when you don't have one. In 1979, my husband bought me one, and since I had been in the band and could read music, I taught myself to play. It was one of my happiest times!

Thanks, Diane! I'm glad you learned to play. Music makes us happy, I think, whether listening or playing.

Great story. I hope you are getting some of your things published! You are so talented.

Thanks, Marilyn! How sweet of you to say that!

Great story, perhaps the sugarless Kool-Aid was intended to keep the students from getting a sugar high and shaky hands.

Could be. I never thought of that, Lewis. Thanks!