Let It Soak In 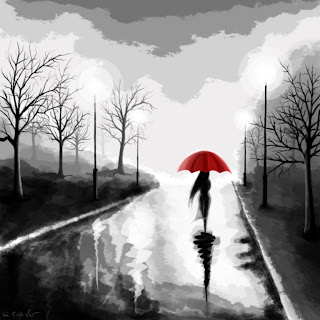 Well, we finally got about an inch of the white stuff I’ve been wishing for—and 19°. It’s a very good day to stay inside doing something you like to do and drinking something hot. Being Saturday makes it better, too. Many are off from work and can enjoy what I just described. For those who have to work, I apologize for making it sound so inviting.
I spend days like this writing or reading or “just being.” I used to think “just being” was wasting time until a few years back when my blood pressure shot sky high and I kept ending up in the hospital. Doctors were certain they’d pin down a reason for my problem and “fix” it, but after every test known to man that should have turned up a reason for the abnormality, nothing was discovered and it was finally decided that the only thing it could be was stress. The numbers seemed to react to the simplest things. They would jump to unbelievable – and scary – heights, literally reacting to my thoughts.
So I had to stop thinking. How does one stop thinking? According to my doctor: meditation! I pooh-poohed that idea at first, but then decided since nothing else was working, not even the three pills a day I was taking, perhaps it was worth a try.
The first time I tried, it was useless. This mind simply would not go blank; no way! Every second I sat there with my eyes closed, there were pictures in my head of all the things I was concerned about and the things I needed to do.
My doctor said, “Keep trying. It’ll happen. Make sure you have complete silence – no TV or radio within earshot.”
That evening, I went to our downstairs family room, closed the door, sat in the most comfortable chair, closed my eyes—and promptly fell asleep!
Talk about going from one extreme to the other!
Several sessions later, I was still doing the same thing. Every time I’d sit in that chair and close my eyes, I’d drift off to sleep. Not for very long, but long enough to relax, and to be slightly embarrassed when I jerked awake. I felt like I was doing something wrong; surely I wasn’t supposed to go to sleep!
But when I reported this to my doctor, he threw back his head and laughed heartily. “Well, that’s great, Peggy!  If you go to sleep, that means it’s working. And it shows how much you need it. So, just take a nap. The world won’t come to an end if you do.”
And then, this wonderful doctor laced his hands behind his head, leaned back in his chair and gave me “the lecture.” He said, “We have to balance our lives; we can’t work all the time. There must be time in our lives for “just being,” he said. “Take the time to do things you enjoy: Read a good book, listen to your favorite music. I don’t mean while you clean the house; I mean, sit down or lie down and really listen to it – let it soak in.” And then he looked into my eyes and said, “Do you ever go for an early morning walk in the rain?” I had to admit I didn’t. He said, “Try it. You’ll be surprised what it does for you.”
By the Grace of God and the help of this wise young doctor, my blood pressure has been under control for several years. Occasionally, things happen that cause stress and I feel myself losing control again, but I now know what brings me back. All I need is an hour—or maybe two—of “just being” and I’m as good as new.
An occasional rainy morning doesn’t hurt either!
Posted by Peggy~ at 5:40 PM

I can relate to this peggy. We need to talk. Very good post!

Wow! This is good peggy. Some doctors take more time don'd they?
Jim

Great! I love this one peg.

Thank you for this, I am going to try it because I really need it my blood pressure isn't the problem, but I'm on my last nerve. this week has been hectic.

Meditation will work wonders for you, Drema. I promise you!