I awoke to a beautiful sight this morning. About four inches of snow on the ground! I stared out my bedroom window in amazement just as I've done with every snowfall for as far back as I can remember. The world around me was white. Spotless. Glistening. And I loved it!

I especially love it before it’s all messed up – before the snow plow comes, destroying the pristine beauty and giving drivers the confidence to venture out. Nothing makes one remember things they need, and must have, like being snowed-in. Suddenly, we can’t live without items we haven’t used for six months.  And so... the silence is broken and it’s business as usual... all too soon.

A good friend e-mailed to ask if I was staying on task with my holiday baking and wrapping as I’d told her I was going to do, "Or did the wild child in you take over and send you outside to make snow angels?” She asked.

Oh my!  Just the mere mention of snow angels takes me back to childhood!  Last winter, I complained many times to another friend that I wanted so much to go out and play in the snow  but hated to go alone, feeling that the neighbors would surely think I’d lost my mind to be doing such a thing at my age. She apparently got tired of hearing me sing the same song, so late one night, she said, "I double-dog dare you to go out tomorrow... alone... and make a snow angel."

Well, I never could resist a dare, so the next morning, with the snow still coming down and the temperature in the twenties, I approached my husband, “Wanna go out and make a snow angel?” I asked. With an icy stare, he said, “You must be kidding.” I assured him I wasn’t, but that I didn’t expect him to do anything but take a picture. I explained about my friend’s dare and said, “I need proof, you see?” Reluctantly, he agreed, “If you make it fast.”

Once outside, I found the twenty degree temperature exhilarating. The child in me sprang to life as I caught snowflakes on my tongue and trudged through the deepest, most undisturbed snow. I was having fun until my husband insisted we do what we came to do and get back in the house.

Down I went onto my back in the snow.  I had on so many clothes; I didn’t even feel the cold. I said, “Ready, Set.... Go... and started moving my arms back and forth over my head while my husband snapped pictures at perfect intervals.

With several pictures done, he was ready to go inside and my playtime was cut short. Although I would love to have spent more time acting like a child, I was more convinced than ever that, even when the numbers say we’re getting old; our actions don’t have to confirm it.

That night, I sent my friend a picture labeled Perfect Angel. I told her how much fun I'd had and double-dog dared her to go out the next day and do the same thing. 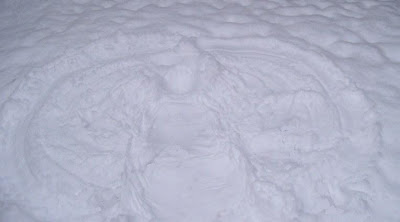 so..it took a lot of snow to bring you back. I knew you couldn't stay away. Like your snow angel story. Looks like fun.

This is nice peggy. I bet it was fun. why didn't your husband make one to?

Did your friend take your dare?