Have you noticed that we’re having sunshine one day in a row. But I’ll take it. My pleasant personality comes out on a sunny day while the “other” one shows up when we have several dreary.

Yesterday was exactly nine months since my son passed. I was thinking about him all day and before I knew it, I had written a story about him. I couldn’t read the final copy with tears in my eyes.
But, as I've often noted, God always seems to provide a good experience to ease the pain of a bad memory. And so... I became as excited as a child when the snow started coming down and covering everything.
I’ve always liked snow. After all my kids were gone and I didn’t have an excuse for playing in the snow, I used to stand at the window watching it come down and wonder if I’d be deemed a crazy old woman by my neighbors if they saw me making snow angels by myself. 😃

Then one night, I was talking to a friend on the phone - telling her what I just told  you and she double-dared me to ignore the neighbors and go out the next morning and make snow angels.

Well, I could never resist a dare, a double-dare at that, so I got up the next morning and put on my warm clothes: sweat pants, two jackets, socks, boots and gloves - kinda looked like a linebacker.

When I told Mr. H. I needed him to go with me to take a picture so I could prove to Sherry that I did it, he looked at me like he wondered who I was and what I’d done with his wife. But, with a little prodding, he went. However, after one picture, he said, C’mon, let’s go in now.

Disappointed that I didn’t get to stay out longer, I followed him into the house like a stray dog.

And I had my picture! 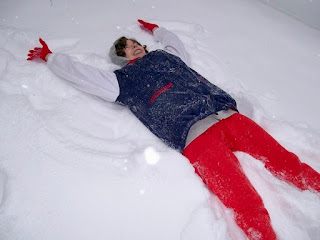 What a wild and crazy gal you are, Pegy! Fun post and good picture.

Peggy, I’m so sorry about your son. May God replace your sadness with beautiful memories. I love your sense of humor and read everything you write. Please give us another book soon!