Will They Remember Me? 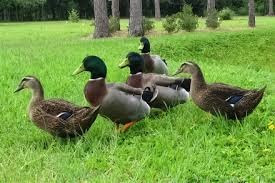 It was a beautiful afternoon. I’d been sitting at my computer for days. But this day, it was hard to concentrate. I kept looking toward the window – daydreaming the way I did when I was a young girl in school.
The weather will change soon, I thought, and I’ll wish I’d taken advantage of days like this to soak up some sun and get a little exercise.
It finally got the best of me. I wasn’t writing anything worthwhile anyway, so I told Mr. H. I’d save him a trip by doing the banking he had intended to do and then I'd go over to Ridenour Lake and walk around for a while. He said, “Okay.”
So, I grabbed my sunglasses and car keys and off I went – to do something totally out of character.
I went through the drive-through at the bank, saving time and, about five minutes later, I was pulling into the main drive at the lake. The place seemed to be unusually deserted for such a beautiful day. I saw only two people fishing. Otherwise, it looked like I’d have the place all to myself.
I pulled over to the side of the road and parked and was ready to get out of the car when I noticed about five ducks right in front of my car apparently taking a midday siesta. Hmmmm... I thought. Do I dare get out? The noise of the car door will surely wake them and they’ll come after me. I can’t take a chance. So I sat there in my car trying to decide what to do.
You see, ducks have feathers and wings and beaks just like any other kind of bird – and everyone knows I’m terrified of birds! Ducks bite, too! My daughter was at this same lake once and a duck mistook her toe for food. He grabbed it and she thought he’d never let go. Her toe was sore for a long time.
Looking around, I saw – just down over the hill closer to the lake – a gazebo. There were chairs and benches beside the water and it looked so peaceful.  “I’ll go down there,” I said aloud. “I don’t see any ducks.” So I started the car and drove the short distance to the parking lot in front of the gazebo. Just to be safe, I looked out both sides of the car and toward the back before opening the door. No ducks! Great! I’ll go sit on one of those benches by the water for a while and soak up a little sun.
I opened the car door, got out, closed and locked it and, I swear, I didn’t take more than three steps toward the back of the car before I heard them. And then, I saw them... at least six ducks... coming toward me as fast as they could. 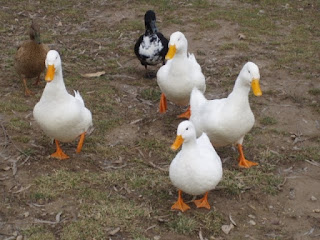 I unlocked the car door and jumped in so fast my head was swimming and I hoped those silly ducks would go back to their swimming, too.
There I was – confined to the hot car again. Might as well go home, I thought. But decided to text my daughter who lives only a few minutes away from Ridenour and see what she was doing.
Me: Sitting in the car at Ridenour. Wanted to take a walk but the ducks won’t let me outta the car.
Daughter: “Lol. I’m on my way.”
She was there in a few minutes. The ducks were back in the water. So, I got out of the car and we took a short walk together laughingly recalling the last time we spent a beautiful fall afternoon at Ridenour. If you’d like to read about it, click here.
It was pretty hot so we didn’t stay long, but we decided we’d come back for a longer walk as soon as the weather cools off a bit.
Some people believe ducks remember certain people. I sure hope they're wrong!
www.amazon.com/author/peggytoneyhorton
Posted by Peggy~ at 12:10 AM

So funny! How could you be afraid of something so beautiful and graceful? I love ducks. Enjoyed your post though.

Well written comment of a phobia that's pretty common. I understand a lot of people are afraid of our fine feathered friends. Love your blog, Peggy. I read it all the time.